Until a few years ago, all audio which was imported into a post-production audio workstation was recorded in real time. Any DAW which incorporated timecode and RS422 support was a potential candidate for auto-conform software, and of course, SADiE was one of the very first systems to offer this. It enabled automatic, synchronised recording of audio from timecode DAT or VTR machines into the workstation according to an EDL supplied by the video editor.

However, since the advent of disk and flash memory-based field recorders, and multi-channel location acquisition practices, the ability to apply EDLs to source material on disk, rather than tape, has become more important. More recently, the autoconform EDL, which is likely to have been generated in mono or stereo, might need to refer to source audio files on disk which could span 8 or more channels.

The new SADiE Autoconform pack, in a single stroke, puts SADiE at the forefront of working with file-based location recording devices. The enhancements in the software dramatically improve the workflow of a typical project in post production.

Multi-channel EDL expansion
An EDL can be 'rippled out' to any track width required in the SADiE playlist. For example, a mono EDL from the video editor could be used to conform 8 channel audio rushes. The user can create and save presets for working with different types of sessions.

Intelligent Re-Linking
Where a program needs to be conformed using files from non-linear location recording units (e.g. Zaxcom Deva™, Aaton Cantar™, HHB Portadrive™), Autoconform allows the user to 're-link' reel numbers from an EDL to the relevant media on the system or network.

Links may be created for each or every reel according to multiple rules, including: Hence an EDL can be used either to conform file-based rushes, or to re-conform previous playlists which have been worked on by the sound editor.

The rules which specify the behaviour of the conform may be combined, and SADiE will use them in the order in which they are entered. If a certain rule doesn't automatically locate the appropriate audio, the next rule will be used to continue the process. For example, a source audio file which did not contain the expected tape number would still be correctly found if its folder location was specified.

Audio and video re-conform from a change list
A 'one shot' re-conform button is provided to re-cut an open SADiE playlist from a mono changelist. Re-conform cuts and edits all enabled streams in SADiE's EDL, including the non-linear video stream in SADiE if required. This powerful feature enables the sound editor to re-conform a full tracklay to picture re-cuts, even allowing him to check sync against the re-conformed picture. As SADiE offers the ability to cut and edit the video stream, this allows the sound editor to continue without having to wait for a new video cut to be provided.

Any tracklaying work which has been done by the sound editor isn't wasted or lost by the re-conform process, as an EDL of any number of streams is automatically re-cut including all automation data. The operator may even specify his preferences for the auto-return behaviour of any automation data, or the time over which it ramps its values across the edits produced by the re-cut.

The SADiE Autoconform pack is available for all Series 5 systems except the BB2 - please contact your dealer for pricing. 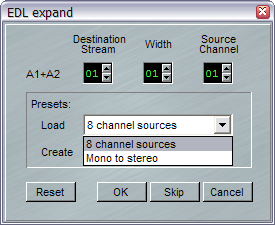 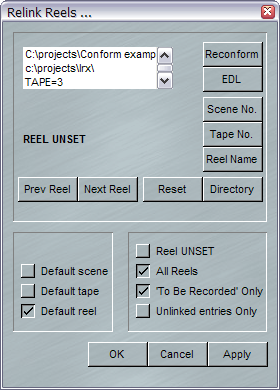 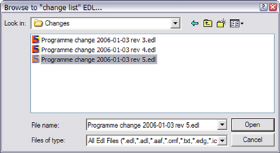