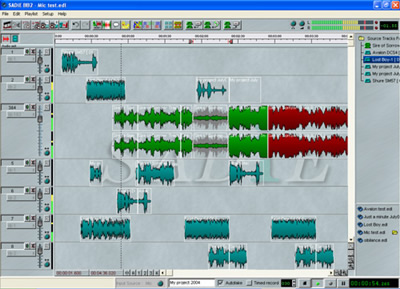 The SADiE BB2 is a high quality, affordable entrance into the range of SADiE workstations. Stereo analogue and digital I/O are contained within a compact, portable unit, along with the audio DSP processing hardware itself.

The editing software is a streamlined, 8 stream version of SADiE 5, offering full compatibility with other studio-based SADiE systems. The user interface is designed around an intuitive one-window concept, which offers fast and productive editing of audio content.

The BB2 is equipped with a stereo microphone input and headphone output, providing an all-in-one package which can quickly be installed on any PC or laptop.

The BB2-J includes identical software to the BB2, and adds a responsive, weighted scrub wheel and editing/transport buttons on the unit itself. This allows users who prefer a control panel to a mouse and keyboard to be quickly at home with the commonly-used editing functions.

Both systems support instant importing of audio files from all common handheld audio recorders such as the Nagra ARES and Marantz PMD series, and other flash-based recorders. They are also fully networkable for integration into a studio-based SADiE network, all of which makes BB2 and BB2-J the ideal tools for producers, programme-makers and non-technical staff to record, import and edit programme assets either for broadcast as a package, or for inclusion in more complex productions.