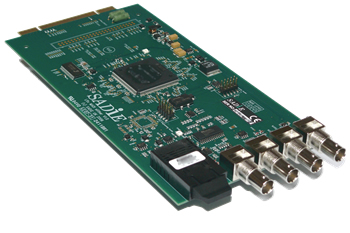 It supports both the original 56 channel MADI standard, and the subsequent AES10-2003 revision which allows 64 channel operation (sometimes known as MADI-X). The LRX2 can assign its record channels either all to MADI, or to any combination of MADI plus analogue, microphone, or AES inputs. This often proves useful in situations such as recording a live feed via MADI from the FOH desk, while connecting local microphones directly to the LRX2 to record ambience and audience noise.

Connections include Optical TX, Optical RX, MADI in, MADI out, Clock in, and Clock out.

¹Note that the MADI slither is only suitable for the LRX2. The PCM-H64 series incorporate their own dedicated MADI in/out modules.