Cambridge, UK: Six enthusiastic members of Prism Sound/SADiE's staff gave up their Sunday morning lie-in on September 21st to take part in the 10-mile Chariots of Fire charity race, an annual event that follows in the footsteps of the famous film, taking its scenic route through the streets and colleges of Cambridge. 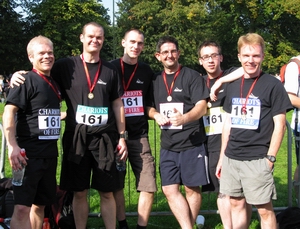 
A total of 408 teams of six took part, with each team member running 1.7 miles. The Prism Sound team gave themselves the challenge of finishing in the top half of the field and they succeeded with a position of 171 and a time of 1:15:43, which averages out at just under 7.5 minutes per mile.

Prism Sound's sales and marketing manager Jody Thorne, who ran the race with a swollen hand having trapped it in an office window the day before, says: "We were really pleased with our time and are looking forward to bettering it next year. Our thanks go to everyone who sponsored us - and to Prism Sound for paying our registration fees."

The recipients of the team's sponsorship efforts (which are still being counted) are Red Balloon, a charity that helps children who have been traumatised by bullying, and Romsey Mill, a charity for disadvantaged families in Cambridgeshire. For the record, the winning team was Glassworks Gym A, which came home in 48:22, averaging well under 5 minutes per mile!