A Lyra audio interface and SADiE 6 software delivered the perfect solution for a complex location recording project at Buckfast Abbey in Devon.

Cambridge, UK: June 10th 2018: “Solid, reliable and exactly what you need when you’re recording live sound and have to get it right first time.” This is how Dave Kitto, partner of Clifton Bank Studios, describes his location recording set up, which consists of a Prism Sound Lyra audio interface and a laptop running SADiE 6 software.

“Last year, we bought a Lyra 1 audio interface as a replacement for a PCM2 unit, which was so old that it had become unreliable,” Kitto says. “The Lyra is a wonderful piece of equipment and it works incredibly well with SADiE, which in turn is an absolutely superb craft editor. By combining Lyra and SADiE we now have a recording system that is easy to use and delivers excellent audio quality, particularly with spoken word material, which we record plenty of.”

Clifton Bank Studios recently took its Lyra and SADiE 6 system to Buckfast Abbey in Devon where Kitto recorded a group of singers for the Institute of Liturgical Music and the Association for Latin Liturgy. This project, which spanned two years and has only just been completed, involved capturing the Graduale Parvum, a selection of Gregorian chant Introits (sung masses) that are sung by Roman Catholic choirs and congregations at regular Sunday services and special services for major feast days. 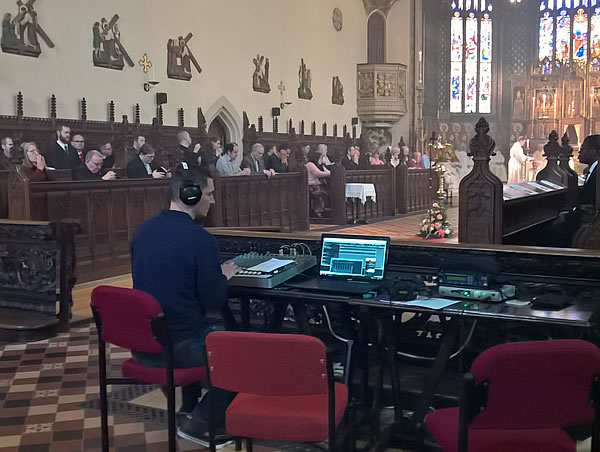 “The Introits were sung in Latin and English by four singers who were accompanied by an organist,” Kitto explains. “Everything was done on our SADiE 6 and Lyra, together with our Izotope RX 6 Standard plug in, which compliments SADiE 6 nicely when required.”

The recording session took three days to complete and the files were taken back to Clifton Bank studios for editing. The recordings, which will eventually be available on line, have already been released as a five CD boxed set that is selling well in the UK and the USA.

“Our clients are delighted with the recordings, which were recently launched at Oscott College in Sutton Coldfield by the Archbishop of Birmingham, the Most Revd. Bernard Longley,” Dave Kitto adds. “The reliability of our Lyra and SADiE 6 system made this a very enjoyable project because we didn’t need to worry about technical hitches. We may not be the biggest audio facility, but we’ve always had excellent service and support from Prism Sound and SADiE, and we greatly appreciate this.”