January 2008 - SMC RECORDS have installed a SADiE PCM-H64 system into their recording facility in Italy. 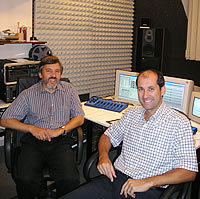 Equipped with 32 inputs and outputs, it serves two purposes: firstly for direct tracking and recording of sessions which take place in the studio, and secondly for editing and mastering multichannel sessions which are recorded on location.

SMC has been active in the music recording sector for over 25 years. Situated in Ivrea, between Turin and Milan, the company was founded by Renato Campajola as a mobile recording studio for acoustic music (classical and jazz) at the highest technological and professional level. Today the company is a benchmark for the Italian recording industry and is expanding business operations in the consulting and production of multimedia projects.

Since 1992 SMC has collaborated with SONY DADC Austria, Europe's largest producer of optical media and in 2003 became a Service Partner for customer services and marketing of their products.

"At SMC we apply technology to the art of sound and music with passion, skill, willingness and experience, in a word: professionalism. The SMC studio works with the most important artists, recording labels, prestigious Italian classical and jazz music magazines, private and public bodies, institutions and foundations. We also carry out numerous recording projects for national and international companies who have found music to be an ideal vehicle for enhancing the quality of their public image."

The SMC studio has recorded more than 800 classical and jazz compact discs with famous soloists and orchestral and chamber groups from Italy and abroad, as well as international jazz artists. 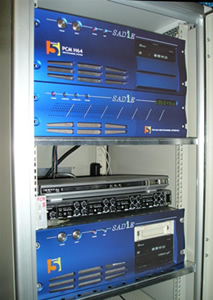 SMC has produced CDs and audio cassettes for many well-renowned choirs and carried out numerous digital remasterings and recordings of ethnic music. The studio has also recorded the sound tracks for advertising campaigns for influential Italian companies and for cultural CD-ROMs, as well as orchestral music for films and television programmes.

Mario Bertodo, manager, producer and sound engineer of SMC Records commented, "We were among the first facilities in Italy to acquire digital editing systems. After 10 years of completing productions on the Mac platform, in 2000 we decided to invest in a SADiE system because of its extreme versatility. We were struck by the immense potential of the flexible mixing structure, the professional mastering capabilities, and the uncoloured, precise definition of the sound.

"To date we have produced and completed more than 400 projects on our three SADiE workstations, including a PCM8, and our most recent acquisition, the multitrack PCM-H64.

"Fundamental to our success has been the professional support, the punctual attendance of Te.De.S and in particular Mauro Piatti, who provides a continuous exchange of useful suggestions with the SADiE technicians".