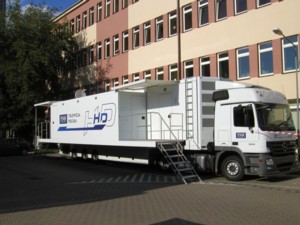 The TVP OB truck - 128 channels of SADiE on board

The system, which was supplied by SADiE's German and Swiss distributor Stefan Mayer, records up to 128 channels of digital audio in 48kHz/24bit. It is fitted with a custom 9-pin connector that allows the transport and channel select on the multitrack recorder to be remotely controlled from the truck's StageTec console, thus giving TVP's engineers more flexibility.

Elmar Götter, of BFE, who designed the audio system within the OB Van, says: "All of TVP's OB vans were fitted with similar SADiE systems. Compatibility and ease of media transfer were important considerations for TVP; therefore it made sense to go with a multitrack system with which they were already familiar. Both TVP and BFE were also impressed with SADiE 's renowned stability and the fact that the PCM-H128 can mirror record on two different media."

The new truck has a total length of 16.5 m and is 4m high. It incorporates three extendable units in its video, audio and VTR/editing areas, along with room and equipment air condition units that provide 70 kW of cooling.

As with previous TVP vehicles, this truck is fitted with Sony HDC-1550//U cameras with Canon Optics, which deliver pictures to a Thomson Kayak 400 vision mixer. Eight VTRs (Sony HDCam HDW-M200P/20, DigiBeta HDW-D2000/20, DVW-M2000P) as well as three networked six-channel HD-server XT(2)HT by EVS are utilized for recording and instant playback.

For video routing, the truck has a 576x576-Matrix Probel Cygnus equipped with 516x528 cross points, which can handle both SD and HD signals. A mix of JVC HD CRT/LCD monitors are used for visual quality inspection.

In the audio area the truck has a StageTec Aurus console, which provides eight track sound for the six program channels. The SADiE multitrack unit is used to record the audio and there is also a ProTools system for instant editing.

The SADiE PCM-H128 is a large scale multitrack digital recorder which features two processing cards to provide double the potential quantity of I/O. It can be supplied as a MADI-only system contained within a 4U rack case, or combined with up to two additional interface expansion units to house a range of modular I/O options. Both 56 channel MADI and 64 channel MADI-X are supported over electrical and optical interfaces. The unit also benefits from the full range of SADiE editing and processing features and slots seamlessly into a range of traditional analogue or digital studios.

"TVP's previous good experiences with SADiE were key to their decision to install another system," Götter says. "This was also an important reason for BFE. We have specified SADiE systems for a number of other installations, including ZDF in Germany, and our customers have always been happy with the way the equipment has performed."

The new truck is now on the road recording various live events for TVP, including all the excitement and action of the new Polish football season. It will also be on show at IBC 2008 in Amsterdam.