Tonzauber takes delivery of the first SADiE LRX2 in Austria 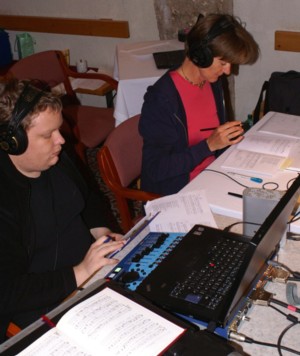 
The system, which was supplied by SADiE's Austrian and German distributor ForTune, is being used as part of a mobile recording rig to capture live classical and acoustic performances by national and international artists.

Georg Burdicek, founder and owner of Tonzauber, says: "We have used SADiE products for many years and have both PCM4 and PCM8 systems in our post production facility. We have always been more than happy with the reliability of the company's equipment and with the intuitive software layout, which is close to perfect for the demands of classical music recording and editing. Given our good experiences with the SADiE brand, it was a logical step to introduce SADiE into our mobile recording chain."

One of the first projects undertaken with the new SADiE system was the recording and editing of a second CD of Gregorian plainsong from the Cistercian monks of Heiligenkreuz Abbey near Vienna. The monks' first CD, Chant: Music For Paradise, was released earlier this year by Universal Music and has now sold in excess of 440,000 units.

"Our LRX2 system was the perfect tool for this production," Burdicek says. "We were working under great time pressure and needed to edit on location in the evenings after each session. The ergonomical control surface and easy to use software made editing on location as simple as it is in the studio. The software's ability to burn CDs directly from the session meant that we could supply the choir leader with a reference CD at the end of each day."

The project was eventually transferred to Classic Sound in London for final mixdown where, thanks to the ease at which material could be transferred using AES31 interchange format, the final steps were hassle-free and didn't require any difficult data import or crucial track re-assignments.

Now part of the Prism Sound group of companies, SADiE is best known for its leading 'craft editing' software that provides the most sophisticated editing capability with an easy-to-use interface.

Designed to fulfil the needs of an ever more complex recording environment and to serve a wide variety of remote recording applications, the LRX2 is a USB2 compatible device that provides all the features location recording applications demand. These include dedicated transport controls, high channel density (up to 48 microphone or line input channels or 64 channels using MADI), the ability to record to duplicate hard disks and general robustness.

In keeping with all SADiE products, the LRX2 incorporates proprietary recording algorithms that are designed to get the audio into a disk file fast, avoiding too much buffering in RAM. Should the recording be interrupted unexpectedly, for example by a power failure, very little is lost - only a few seconds as compared to less robust software implementations where potentially large amounts of audio can be lost if recording is interrupted.

The flexibility of the LRX2 hinges on its ability to utilise the same high quality I/O cards as the PCM-H64 and PCM-H128 multitrack workstations. This in-built flexibility allows users to customise the LRX2 to suit their circumstances rather than having to modify their working techniques to cope with other equipment. Tonzauber's LRX2 has 16 high quality microphone inputs, 16 channels of AES/IO and 16 analogue outputs. When used in conjunction with the studio's Studer D19 microphone pre amps it can accommodate large productions of up to 32 mic inputs.

Burdicek adds that the system's compact yet sturdy build makes it ideally suited to withstanding the rigours of the live recording environment.

"We have a very discerning customer base that demands the highest quality recordings," Burdicek says. "The LRX2 allows us to guarantee the quality of our work and has the added advantage of allowing us to optimize workflow because we are using a single platform from content creation through to content delivery. We are particularly happy with the SADiE software, which is renowned throughout the professional world for its stability and for providing a streamlined interface without unnecessary graphical gimmicks. We are also delighted with the excellent support we continue to receive from ForTune and SADiE in the UK, both of whom are always happy to answer any questions that might arise during normal operations."