THE SADiE LRX2 Location Audio Workstation has been designed to fulfil the needs of an ever more complex recording environment and to serve a wide variety of remote recording applications. It is as effective in capturing the original soundtracks for film and television productions as it is for producing location multitrack audio recordings for release on distributed media such as CD or DVD.


The LRX2 combines SADiE's proven high-quality professional audio input and output 'slither card' I/O modules with a tactile hardware control surface and the ability to use a standard laptop via USB2 as the host computer to provide a powerful and effective combination according to the particular application.

Based on the original innovative SADiE LRX introduced in 2005, the LRX2 takes the concept a significant stage further by the provision of additional DSP power, plus control surface enhancements. This extra DSP enables recording for up to 64 channels using the MADI interface, or 48 balanced analogue inputs which can be Line level or Microphone inputs with Phantom power. Sampling rates up to 96kHz/24bit are supported with a variety of dedicated input cards. For maximum compatibility, these cards are the same as those employed in SADiE's flagship H64 and H128 multi-track editing workstations.

The LRX2 hardware comprises a small assignable mixer with 8 motorised faders; including pre-fade listen and dedicated record enable buttons; a complete editorial interface with fully weighted jog wheel and ergonomic editing buttons; locator memories; transport controls and a headphone monitor output with separate headphone level control and a side-mounted microphone input socket for slate/talkback functions. The dedicated and assignable editing function buttons include Scrub, EDL/SRC, Xfade, Select, Zoom, In, Out, Razor and Preview plus the weighted jog wheel. The built-in mixer with automation and the 8 motorised faders allow rapid switching between the input and output buses with simple bank switching, pre-fade listen over headphone output, direct record track select, plus locator buttons and a separate monitor bus. The LRX2 is complemented with professional interfaces to lock the machine to timecode, video ref or gen-locked incoming AES ref, depending upon the application.

The LRX2 is supplied with the dedicated SADiE Multi-track Recorder software (also known as MTR) and in this form is known as "LRX2 LiVE". This provides an on-screen graphical user interface which greatly simplifies user operation and enables the operator to quickly get to grips with the system. Sessions created in Multi-Track Recorder are fully compatible with, and may be opened in, SADiE 5 or 6 software for more sophisticated post production operations. Full metadata support is provided to allow the operator to easily keep track of recordings and takes. LRX2 can also be supplied with full SADiE 6 software at additional cost. 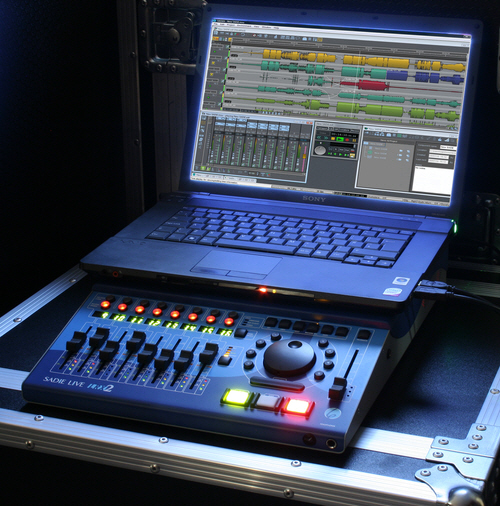 The flexibility of the LRX2 hinges on its ability to utilise the same high quality I/O cards as the H64 and H128 multitrack workstations, according to a particular application; be it a multitrack analogue recorder; a multitrack digital recorder; a location sound recorder and playback device; on-set ADR; etc.

Input and output options are provided by three 'slither' receptacles which can accept any of the SADiE slither interface cards. In addition to the standard 16ch ADC/DAC and AES/EBU digital I/O cards, a switchable high quality 16ch mic/line card is available with 48v phantom power and selectable gain steps. A dedicated MADI interface card is also now available which facilitates easy interconnection of up to 64 tracks to studio or live digital consoles.

Slithers currently available are as follows:

This in-built flexibility allows the user to customise the LRX2 to suit their circumstances rather than having to modify their working techniques to cope with the inadequacies of their equipment.

The LRX2 utilises a standard PC Laptop running Windows with a USB2 interface. A second external drive may be simply attached, via USB2 or Firewire, to mirror recordings and provide a simultaneous safety copy. An added benefit is that a DV-AVI video stream may be simultaneously captured for playback or ADR whilst the recorded performance is still under way.

In addition to the I/O cards detailed above, the following hardware options are also available: