Cambridge, UK: July 31st 2018: Excitement is building for the next Pro7ect Songwriting Retreat in Brighton with news that the hugely talented producer, mixer and songwriter Gethin Pearson is joining the all-star cast of recording professionals who will ensure the 2019 event is a massive success. 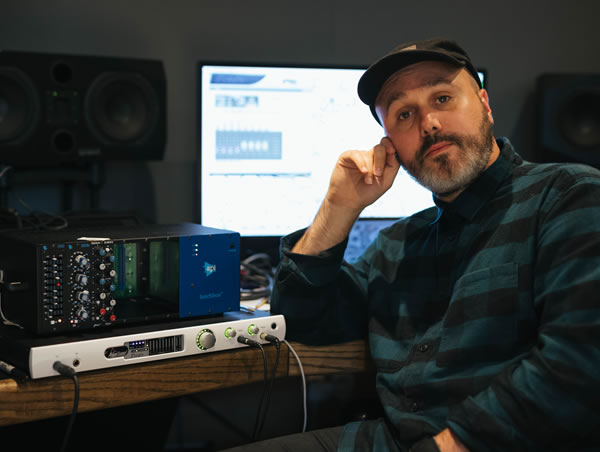 Multi-instrumentalist Gethin Pearson is comfortable with a range of genres, from rock and metal to classic indie, electropop and hip hop. His enthusiastic and encouraging style has a special way of nurturing talent by enabling artists to find their own sound, pushing them out of their comfort zone to explore new influences and sounds whilst also remaining true to themselves and their art.

Gethin recently produced tracks on the To Kill A King album The Spiritual Dark Age including the singles The Good Old Days, Spiritual Dark Age and No More Love Songs, which he also co-wrote. Gethin also produced Kele Okereke’s contribution to the recent Universal Love album, My Guy. He's currently working with new acts The RPMs and The Pitchforks. He also recently did vocal production for Alma + French Montana’s massive single Phases as well as vocal production for Charli XCX. Other artists that Gethin has worked with include Mallory Knox, Hark, Army Of Bones, Benji Wild (Asteroid Boys), The Enemy, Ronan Keating, Judas, Monico Blonde, Purest, The Morning and Joe McVeigh.

“I’m delighted to be taking part in the next Pro7ect Retreat as I really enjoy collaborating with other songwriters and artists,” he says. “Having the opportunity to work alongside other producers is also exciting because production can be a very lonely business and it’s rare to have so much recording talent in the same place at the same time. That’s the great thing about events like Pro7ect – they give you a chance to share ideas and help new artists and songwriters develop their skills. The location is cool, too! Hotel Pelirocco is such an amazing and inspiring place to work.”

Lisa Fitzgibbon, Pro7ect Creative Director, says: “Gethin Pearson is not only an incredible producer, but an inspired songwriter as well. He is the perfect Headliner for the Prism Sound Studio and we are looking forward to working with him at P719.”

Pro7ect 2019 will take place at the Hotel Pelirocco in Brighton from February 25th to March 1st 2019. Songwriters and artists will have the opportunity to work with A-list producers to write, record and produce great music in four pop up studios, all equipped with the latest recording technology. Gethin’s room is sponsored by equipment manufacturer Prism Sound and will feature some of the company’s award-winning audio interfaces, which also feature in Gethin’s own studio in Wales. Other sponsors include PMC, Focusrite/Novation, Roland and Audio Technica.

Pro7ect participants work with producers to write and record a track a day for three days. The teams are changed each day and the songs are either written for one of the artists in the room or to spec using tip sheets. Every evening there is a feedback session where teams play the result of their day’s work to the entire group.

“The Pro7ect experience is highly collaborative and often results in a large volume of material being written and recorded in a very short pace for time,” Lisa Fitzgibbon adds. “The event attracts songwriters from all over the world and a number of the songs we have created over the five years Pro7ect has been running have been optioned by artists and publishers.”

Songwriters and artists who have taken part in previous Pro7ect@The Hotel Pelirocco retreats have nothing but praise for the experience. Check out a video highlighting their views and opinions by following this link: https://www.pro7ect.com/#about

Pro7ect 2019 is now taking bookings and the cost of participating is between £1089 and £1299, which includes full board and accommodation, producers and studio equipment for four nights. Places are limited and anyone wishing to take part should visit www.pro7ect.com to apply.