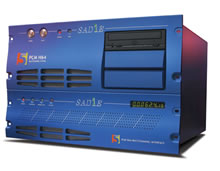 Each of the three scaleable PCM H64 systems is currently provided with 32 AES/EBU inputs / outputs, considered adequate for the quantity of surround stems the facility requires, plus a complete set of CEDAR restoration tools which now include multichannel capability. The new systems will all be networked together, providing seamless interchange between the three rooms at the facility.

Founded in 1997 by renowned producer/engineer Robert Margouleff and musician/engineer Brant Biles, the demanding nature of Mi Casa's projects combined with their strive for excellence led to the obvious choice of SADiE for their primary workstations. Noted past projects completed at the facility on SADiE workstations have included such projects as MGM's re-release of the entire James Bond series for DVD, and New Line Cinema's Lord of the Rings trilogy box sets.

"Our main reason for choosing SADIE," commented Margouleff, "is that it was the only workstation that afforded us the mastering tools we deemed absolutely necessary for the restoration and mastering of motion picture soundtracks."

As their workloads have increased along with their clients' demands, and as SADiE's technology has progressed, Mi Casa came to their second obvious choice of upgrading all of their existing SADiE systems to the new Series 5 hardware platform.

"The major benefits for us in moving to all PCM H64's are numerous and we are very excited about the upgrade." remarked Biles. "We've quadrupled our DSP capabilities. We are fully networked between all of our rooms, with the ability to have centralized storage and backup. All of this, combined with the many enhancements in the SADiE V5.3 software, will cause a dramatic increase in efficiency and productivity throughout our facility."