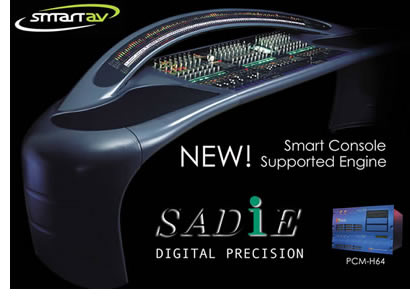 The Smart Console™ is a new breed of audio mixing control surface that delivers a five-fold improvement in ergonomic efficiency when mixing and editing large numbers of channels.

The SADiE Series 5 digital audio engine incorporates the use of a 64-bit high speed PCI interface and enables a five-fold increase in throughput, creating an exceptional design that is truly different from anything currently on the market.

"We're very excited to announce this new cooperative working relationship with SADiE. The integration of the Smart Console™ ergonomically efficient interface technology with SADiE's sophisticated Series 5™ engines promises to deliver some amazing capabilities." Said Joseph Narai, MD of Smart AV. "The quantum throughput improvements in the new Series 5 SADiE digital engines are a perfect compliment to the similar improvements gained from the revolutionary ergonomics in the Smart Console."

Commenting on the new agreement between the two companies, SADiE Managing Director Joe Bull added, "Like so many audio engineers, we have been profoundly impressed by the innovative and unique design of the Smart Console™. We view the console as a natural partner for the new SADiE PCM-H64™ large-scale multi-channel platform. This powerful combination will undoubtedly have tremendous appeal to the post-production and music recording community."

The SADiE PCM-H64™ represents a powerful new large-scale multi-track DAW for post & music applications and extends the impressive range of SADiE Series 5 high quality audio workstations. At the heart of the system is the newly developed SADiE TNG3 processing engine. Each TNG3 card is capable of the real-time editing, equalization, control of dynamics and mixing into full surround of up to 64 channels of 48k/24bit, or up to 16 channels of 192k/24 bit.

The Smart Console™ is the first audio control surface incorporating patented ARC Technology™, which uses a physical arc located above the controls and within arms reach of the sound engineer to represent all the channels on a traditional long console. Simply touch the arc at any location and the desired channel and the channels surrounding it immediately appear in front of the sound engineer, as though he/she had instantaneously moved in front of those channels on a traditional long console. With this single touch, 800 previously out of reach controls snap to within reach.

Smart AV is a Sydney, Australia based designer and manufacturer of premier ergonomically-advanced control surface technology.