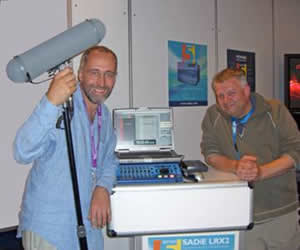 Tacet is a professional sound rental company specialising in digital sound equipment for the film and TV industries, operating principally in the feature film and TV drama and documentary areas, and is committed to providing cutting-edge digital location recording packages that are designed for the location recordist and production mixer.

Tacet was established around five years ago and is headed up by two of the UK's leading independent sound recordists - Simon Bishop and Simon Clark. Both have an impressive list of credits to their names - Simon Bishop is well known for his work on TV dramas such as the highly successful series "Auf Wiedersehen Pet" and also major feature films such as "Star Wars Episode Two". Simon Clark is also much in demand with notable TV series such as "Waking the Dead" and the BAFTA Award winning drama "Kelly" to his credit.

The SADiE LRX2 Location Audio Workstation combines SADiE's proven high-quality professional audio input and output modules with a tactile hardware control surface and the ability to use a standard laptop as the host computer. The system comprises a small assignable mixer with 8 motorised faders; including pre-fade listen and dedicated record enable buttons; a complete editorial interface with fully weighted jog wheel and ergonomic editing buttons; locator memories; transport controls and a headphone monitor output. The user is able to record up to 48 discrete inputs at 48 kHz/24bit (or up to 32 tracks at 96 kHz/24bit) or even up to 64 tracks via an optional MADI interface.

Tacet specialises in the rental of portable digital non-linear recorders and had recognised the need for a next-generation system offering higher track-count capability together with all the convenience of the file management, metadata handling and session logging tasks usually carried out on laptop computers that form part of the essential equipment of the recordist which made the LRX2 the obvious choice. Speaking of the new purchases, Simon Bishop commented "The first job out for the LRX2 was with a Pro Tools operator, but after only a ten minute demo of SADiE's user-friendly MTR interface he was up and running with the LRX2 and was completely at home with the system. The LRX2 can do up to 48 tracks; in fact it can do up to 64 if you use the MADI card.They have already been out on a number of reality shoots, concerts from London theatres, and we are hoping to do a big band recording with one shortly. Reality shows often use a radio mic for each participant, which can be many. These multiple sources might need to be recorded on a multitrack recorder, and remixed later in post production. The LRX2 is an ideal choice for this type of work - it is small and yet fully functioned, and can be powered from 12vDC".

Simon Clark added, "It is a really exciting tool, a great and compact multitrack recorder which is the size of a telephone directory opened up with a laptop sat on top which is used as a screen and to fire controls at the LRX2. The SADiE unit does all of the DSP and our experience so far is that it has been rock solid. It is also surprisingly cheap to rent - but then we would say that, wouldn't we!".