Cambridge, UK: Dunshaughlin-based Jealoustown Recording Studios, situated about half an hour north west of Dublin, has invested in a range of SADiE and Prism Sound equipment to help take its studio offering up to the next level. The new kit comprises a SADiE PCM4 desktop mastering editor, alongside two products from Prism Sound's Maselec Master Series of analogue signal processors; the MEA-2 Precision Stereo Equalizer and the MLA-2 Stereo Compressor. 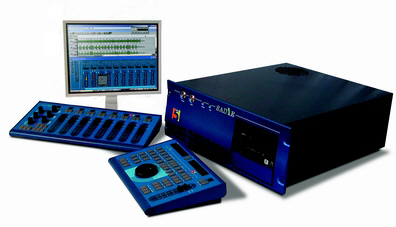 
"Everywhere else I look it's Prism Sound and SADiE," comments Jealoustown Recording Studios owner, Stuart Gray. "That's why I bought them, It's as simple as that."

Jealoustown specialises in commercial work and Gray will use the new kit to master the work of both signed and unsigned artists from Ireland's currently burgeoning music scene. "Business is doing really well at the moment," he says. The highly affordable SADiE PCM4 is ideal for music and radio production and all general high-end editing applications. A 4 input / 4 output SADiE desktop system running full SADiE V5 software, the PCM4 comprises a PCI plug in card and provides 4 channels of balanced line input and output as well as digital I/O (AES/EBU). The PCM4 utilises the SADiE Series 5 hardware platform to meet the demand for more powerful high-speed processing of today's high-resolution audio formats up to 96kHz/24bit. In addition to the increase in processing power, the PCM4 offers full support as standard for real-time Direct-X plug-ins and features standard Windows networking.

The MLA-2 (which for optimum transparency and freedom from noise employs a non-VCA design) is a stereo or 2-channel compressor with stepped drive (input gain), ratio, attack and release time and output gain controls. The MEA-2, meanwhile, is a stereo or 2-channel, four-band precision analogue equalizer with stepped Q/shelf, frequency and cut/boost controls on each band. It is designed for recording and mastering applications where ultimate sonic performance, musicality and precision are required.

"My ambition is to make sure that Jealoustown is a state-of-the-art studio, with everything that anyone will ever need and SADiE is a very large part of that," concludes Gray.