SADiE helps In The Dark celebrate the culture of radio

Cambridge, UK: The SADiE name is one that needs no introduction to radio engineers thanks to the unique relationship the company has with many of the world's top broadcasters. To reinforce its presence in this field, SADiE recently sponsored In The Dark's high profile events at the London International Documentary Festival (LIDF), which took place in early May. 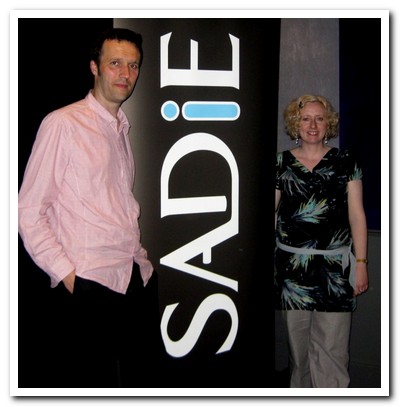 Alan Hall and Nina Perry at In the Dark

In The Dark is a unique organisation dedicated to celebrating and enriching the culture of radio documentary in the UK. Through workshops and live "listening" events that bring together producers from around the world it aims to encourage a thriving community where radio can be easily accessed, enjoyed and discussed.

This year, In The Dark hosted a number of events in association with LIDF. These allowed audiences to close their eyes and open their ears to a world of aural story telling. Running alongside LIDF's programme of films and photography, it asked how story-telling through sound continues to enrich documentary culture as a whole.

Among the international guests taking pert were Canadian independent producer, Chris Brookes; Norwegian Radio's Head of the Radio Documentaries, Berit Hedemann; and British composer, sound designer and radio producer, Nina Perry, each of whom presented their work "in the dark" to hushed audiences in the Courthouse Hotel Cinema in Central London. On the last day of events they were joined by Tony Phillips (BBC World Service) and Francesca Panetta (The Guardian) in a discussion about the crafted feature in the digital age. All events were guest-chaired by independent producer Alan Hall (Falling Tree Productions).

Commenting on the In The Dark, Alan Hall says: "I was delighted to curate these events because I appreciate the ambition of Nina Garthwaite, the event founder, to encourage and celebrate close listening. It was wonderful to share the experience of listening in a cinema space to beautifully mixed pieces of radio. As a producer of crafted radio features, I'm accustomed to listening attentively in mixing sessions, but In the Dark provided this opportunity to members of the public as well as radio professionals. That SADiE helped make this a possibility is entirely appropriate - it's an elegant and sophisticated editing system that enables producers to make the most of their ideas. In the Dark then offered these inspiring sessions that I believe help to elevate the form of the radio feature."