Cambridge, UK: SADiE's innovative BB2 desktop audio editing system helped producer Francesca Panetta scoop this year's Sony Gold Award for Best Internet Programme. Set up by herself and Felix Carey in 2008, the podcast seriously impressed the judges, who commented: "The Hackney Podcast is just the type of targeted and locally orientated content that sets podcasting apart from conventional radio broadcasting. Using first rate contributors the podcast examined how water fits into the lives of people in Hackney. The production quality is outstanding giving the whole listen a water-like lyricism that carries the listen through to its conclusion." 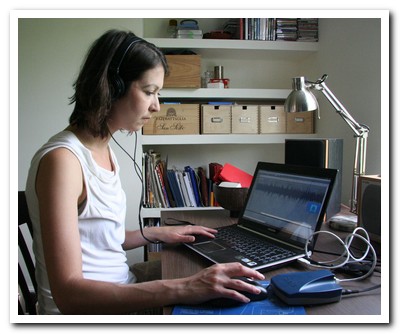 Francesca Panetta at work with SADiE


All of the award-winning series of Hackney podcasts have been edited on SADiE's BB2, and are driven by the paradox that one of London's historically most-deprived areas is now also one of its fastest-growing and most culturally diverse. It was this contrast that initially led Panetta to, as she puts it, "combine local politics, environmental issues and everyday lives with art, literature and music." Her Hackney podcasts were designed from the outset to "provide a space with no rules, a platform to push the boundaries of traditional programme making," she adds. The latest editions, Night and Water, the latter of which won the Sony Award, used sound design, environmental recordings, new music, poetry, readings and commentary to allow Hackney residents to hear their neighbourhood in a completely different way.

Panetta first used SADiE for editing on joining Radio 3 in 2000, and when the BB2s were introduced to the BBC in 2004, she bought one. "I was working as a freelance reporter for Radio 4 in my free time then and didn't want to spend my evenings and weekend in the office editing," she explains. "SADiE is a great editing programme for any speech programmes. The playlist editing mode in particular means I can edit quickly and I love the way you can easily adjust the fade in and out of an edit in this mode. None of the other editing programmes I've used have this."

Another simple but key tool for Panetta is slip. "Cubase (as used at the Guardian) doesn't have this, so every time I want to move an edit I have to highlight everything I want to move to the right and manually move it. Also, as a lot of my features end up with pretty complicated EDLs, I use the slip left function a lot too.

"I can't imagine editing on destructive software," she continues. "SADiE allows me to very quickly hack together a rough draft, then go through and polish up edits afterwards. My process of working means that I don't make final decisions in the early stages of an edit. I need to get the flow and pacing right first and that can mean losing large sections of a programme while putting it together. If I've spent too long agonising over edits early on, I would feel less inclined to get rid of these sections and it would take too long to get to the first draft stage."

Panetta recalls the Night podcast as particularly complex. "I had around a hundred .wav files, and had to listen to and log all the material on paper. As I do this, I can usually hear the programme structure develop in my head, and I then begin editing, usually starting at the top of the programme. Night had several mini-features in the programme but I needed to begin editing them at the right time. I made Night on a BB2. As it's only got four stereo tracks I had to keep bouncing down part of the programme, but I'm now working on a beta version of SADiE 6 so there's no need for that any more.

"For me, pacing is everything," she continues. "This includes the pacing of stories, textures and sound. So often I lay down wildtrack and music first and then cut speech on top. I'll lock those tracks and 'rough-hack' the speech above it. My features are also heavily textured. I close-record a lot of my speech so it's pretty dry and then build my own sound wall behind. I also use a lot of music in my pieces and often not just one stereo track. Felix Carey, another Hackney Podcast producer, composes most of our music, and I'll layer several of his music tracks on top of each other. For the speech, and sometime for some of the soundscapes too, I'll create my own stereo image."

Panetta is now working on a 'coffeecast'. "We're going to compare the coffee houses of the eighteenth century with Hackney's current cafés." she explains. "We've already recorded lots of interviews around Hackney and got some amazing sounds, so I hope to start editing it all together soon."

To have a listen to the podcasts mentioned here and others, visit http://hackneypodcast.co.uk/.