Cambridge, UK: With a growing client roster that includes artists, labels and distributors from the UK and overseas, Stardelta Audio Mastering has already proved there is demand for a premium hardware-based mastering facility at the price point being offered by online plug-in mastering services. 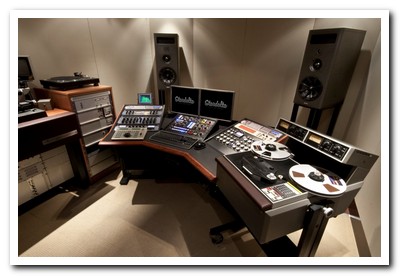 
The new facility, which is based in Devon, was established by Lewis Hopkin and Aidan Wallwork, who between them have more than 30 years experience of engineering and production.

"We've both been mastering for a number of years now and felt there was a significant gap in the market for our skills," says Hopkin. "Having cut records with some of the best cutting engineers in the world, we also really wanted to bring a cutting lathe down to Devon because we see no reason why this type of facility has to be located in London."

In keeping with their philosophy that only the best hardware would do, Hopkin and Wallwork have invested in two Prism Sound ADA-8XR multichannel converters. They have also bought a Maselec MEA2 equalizer and Maselec MLA2 compressor, which are part of the Prism Sound family.

Wallwork says: "We were both well aware of the high pedigree of Prism Sound and Maselec gear as this equipment is a staple in many top recording and mastering studios. While we were investigating equipment options for Stardelta I went along to a trade show and met Prism Sound's sales executive Chris Allen, who gave me a demo of the Maselec range and the Prism Sound ADA-8XR converters. Lewis was equally interested in having them for our studio so it was logical next step to set them up in our mix room and demo them there."

A blind converter shootout followed, with the Prism Sound units going head to head with a number of other different converters. The result came down resoundingly in favour of the ADA-8XRs and Stardelta's order quickly followed.

"Quite simply, the ADA-8XR sounded fantastic and was in clear first place. It is as transparent a converter as we have heard with a stunning level of clarity and depth. Also the dual path is incredibly flexible enabling us to work at different sample rates with ease, which is very important in mastering."

Prism Sound's ADA-8XR is a multi-channel AD/DA converter that can be configured in numerous ways using plug-in modules to suit a very wide variety of applications. Since its release it has rapidly become the top professionals' converter of choice in the most exacting applications in music and sound recording, mastering, broadcast and post production, offering the cleanest and most transparent conversion on the market.

Stardelta's investment in the Maselec gear was equally straightforward as the facility already owns a number of Leif Mases units, including an MTC2 and a MPL2 HF limiter, which Wallwork describes as 'indispensable'.

"The Maselec gear is in a league of its own," he adds. "We have a few choice pieces of equipment for adding flavour when it's required but when we need a clean, surgical tool, be it the clean gain and control of the MLA2 or the transparent versatility of the MEA2, it doesn't get much better than Maselec."

Although both Hopkin and Wallwork are seasoned Mac users and had previously been using another popular mastering program on a Mac, their involvement with Prism Sound led them to demo a SADiE PCM8 mastering system, along with a native version of the new SADiE 6 software running on a custom-built computer.

Wallwork says: "We were having some workflow issues with our old mastering program and were looking for an alternative. We demoed the SADiE system and were very impressed. It is exactly what we need, nothing more and nothing less. It handles complex tasks quickly and efficiently, with all the stability a mastering situation demands. What's more, the support we have received from Prism Sound/SADiE is second to none - any query is dealt with instantly and it is good to see the user feedback constantly being written in to updates."

Stardelta officially opened at the beginning of this year and since then it has tackled projects across all genres. The most recent of these include 'Bright Lights' by DJ Die (winner of the Mercury Music Prize with Roni Size & Reprazent) and Interface featuring William Cartwright, which is doing well in the Drum & Bass scene at the moment. Another high profile project was the '10:10' EP by House music pioneer Tom Middleton for Tool Room Records, as well as Hip Hop legend Skitz' new LP 'Sticksman' for Essential, which features a who's who of UK rap talent. Add to this projects for Tru Thoughts, Atomic Hooligan, Foreign Beggars, Benny Page, DJ Vadim, Plastician, Ape Music, Rico Tubbs, Natural Self and Erb N Dub and it's easy to see that being based in Devon is no barrier for the success of this facility.

Hopkin adds that Stardelta spent a long time putting together the best sounding and most flexible signal chain possible. After extensive testing he and Wallwork agreed that the Prism Sound, Maselec and SADiE products fitted that bill perfectly.

"While we have some very colourful pieces to add some flavour when it's required, for us the most important feature of nearly all of the Prism Sound, Maselec and SADiE equipment is it's exceptional functionality, along with its ultra transparency. It lets you get in and get the job done without anyone ever knowing you were there."

The rate at which Stardelta's client list is expanding for both digital and vinyl suggests that the company is on the right track and the pair are confident that having taken the time to get the gear choices right, Stardelta now has the tools to tackle every situation, no matter how demanding.