Cambridge, UK: Bournemouth University has become the first SADiE customer in the UK to take delivery of the new SADiE 6 audio editing and production software. 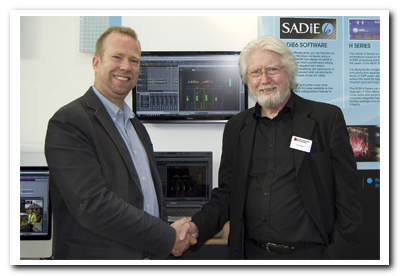 Prism Sound, which is making the new SADiE 6 software available to the public at IBC 2010, has also announced sales of 10 native licences to Aberdeen College and 16 SADiE 6 licences, which will run on their existing SADiE PCM2s, to Sunderland University. These will be delivered shortly after IBC.

SADiE 6 products are application based and are focusing on the core SADiE expertise of Radio Production, TV/Film Post, Mastering, and high-level creative Sound Design. Although SADiE 6 takes advantage of existing SADiE 5 hardware for latency free recording, with no dedicated hardware requirements the product range will be more cost effective, taking the SADiE brand, reputation and advantages into new markets. The extended compatibility is significantly reinforcing its appeal to educational institutions and professional users around the world.

Professor Sean Street, Director of the Centre for Broadcasting History Research at Bournemouth University's Media School, says: "From very early on we have wanted to give our MA in Radio Production students the closest possible representation of the real world conditions they will find when they enter the job market. As a former BBC employee, I was familiar with SADiE which I had used on many occasions, particularly for the production of feature material. I could see that SADiE was a growing technology and therefore one that it was important for our students to learn.

"We began installing SADiE in its older forms in 2005 and began a dialogue with Prism Sound, which now owns SADiE. From what we were hearing it was clear that SADiE 6 was going to be a must-have for the industry and therefore a must have for our students. Sadie 6 is revolutionary in many ways, but in particular it is the ability to use the software natively on any computer that really makes a difference to us. Later this year we are launching a BA in Radio production, which will run alongside our existing MA and our Foundation degree top-up BA. Until now we have only been able to give our MA students the opportunity to learn SADiE, but because this new software can run on existing computers and laptops, we will be able to teach this technology to all our radio students."

Professor Street adds that Bournemouth University is also in discussions with Prism Sound to introduce a SADiE accreditation certificate.

"Our students will be given the option of undertaking a set of exercises and tests to become accredited SADiE operators," he explains. "This will enable them to walk into any broadcast establishment anywhere in the world and say 'I am an accredited SADiE operator, I come to you on a plate because I am already trained'. In real terms this will be a major advantage in the job market."

Commenting on the sale Pete Nash says: "We are very happy to continue our long standing relationship with Bournemouth University and are delighted they have been the first in the UK to take delivery of this exciting new product.

"It is essential for students to have access to cutting edge technology and to develop an early understanding for the tools they will be expected to use once they enter employment. Universities such as Bournemouth, Sunderland and Aberdeen all recognise the need to invest on behalf of their students, many of whom will become the technicians and managers of the future. Bournemouth University, in particular, has an extremely good reputation for the quality of its radio production courses and has been incorporating SADiE into its curriculum for many years. By enabling its students to understand the full extent of SADiEs high-end editing functions and workflow advantages, Bournemouth is giving its students a competitive edge in the employment market, especially as SADiE is the mainstay of so many broadcasters including the BBC."