Cambridge, UK: Acclaimed mastering engineer Ron Skinner has become one of the first recording professionals in Canada to invest in the new SADiE 6 software platform. 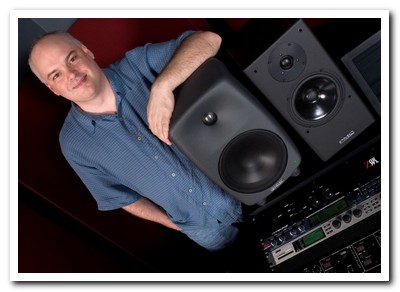 
Ron has been using SADiE equipment since opening Heading North Mastering, his Toronto-based mastering suite in 1999. He began with a SADiE 24/96 with 8 channels of I/O and then continued to upgrade, taking delivery of the first PCM-8 system in North America before finally installing a PCM-H16 with SADiE 6. He has also upgraded his laptop to SADiE 6, using this in conjunction with a BB2-J and sometimes with native hardware.

"I need to keep up to date with the software in order to compete and to stay relevant for my clients," he says. "This is why I reacted so quickly to the launch of SADiE 6. I literally upgraded the very first day it became available in North America."

As one of Canada's most prestigious mastering engineers, Ron Skinner has worked with numerous local artists including Irish Tenor John McDermott, Grammy nominated and Juno Award winning Jazz saxophonist Jane Bunnett and Polaris Prize nominated Elliott Brood and Dan Mangan. Ron also works as a recording engineer and producer and is a staff producer at CBC Radio in Toronto, a position he has held since 1992.

Heading North Mastering provides Ron with a relaxed and cost effective environment in which to work on his music mastering projects. The facility incorporates a range of high end equipment including some recently installed PMC speakers, which were acquired at the behest of his classical and jazz clients who wanted accurate, open and spacious sounding monitors as an alternative to his main monitoring system.

As a long-time SADiE advocate Ron Skinner believes that SADiE 6 offers some major improvements over earlier versions of the system.

"It has a more modern, attractive look, which may be a small thing but is something that my regular clients noticed right away," he says. "However, the most important change is the ability to switch from SADiE hardware to Native hardware and back again whenever I need to. This is especially helpful when clients bring in their own I/O. SADiE 6 also gives me the ability to record on any CD burner - not being tied to my Plextor has been great and gives me more options."

Ron says the transition to SADiE 6 was easy as there were enough similarities with his existing system to make this straightforward. He also enjoys now having access to the power and flexibility of SADiE via his laptop.

"The trim editor is the single most important tool in SADiE. It is very unique and allows for very fast and precise editing that I just haven't found on any other system," he says. "Now that SADiE runs with native drivers I don't need I/O or DSP cards to run the software - I can simply use the Windows driver that came with my laptop. This allows me to listen on the computer speakers or headphones without any hardware. While I don't make critical judgements working this way it does allow me to do prep work when I am on the move or away from the studio. I will often set up projects and do prep work when I am sitting on my front porch then move to the studio when I need to make critical decisions."

Ron remains convinced that SADiE is one of the best editing tools at his disposal and says he can't understand why so many people struggle with other systems when SADiE is so simple.

"Clients are astounded at how quickly and accurately I can make an edit. They are used to making a change, then listening and tweaking again and again to get it just right. When I perform a tricky edit in split seconds they have a hard time believing that it was done properly so quickly. One of my clients calls me speedy whenever I do an edit. He thinks that I am really fast, but what he doesn't realize is that I have a great tool that allows for this speed and accuracy."

Being able to grow with a system has also proved a major advantage. When Ron started getting requests t mix projects as well as master them, he found that his PCM8 wasn't sufficient to mix larger track counts. Moving to a PCM-H16 gave him all the power he needed, as well as extra I/O for analog summing, etc.

"SADiE has consistently provided an answer to my needs and allowed me to grow without too much pain," he says. "I do feel that SADiE gives me an edge and improves my work at every step."

Since installing SADiE 6, Ron Skinner has used the new software to master projects for two Canadian Roots acts - Elliott Brood and The Warped 45s. Both projects were produced and engineered by John Critchley who is making a name for himself as a producer in Canada and who consistently turns to Ron Skinner to master his work.