Cambridge, UK: On Friday, 15 July 2011, Prism Media Products Limited, whose brands include Prism Sound, SADiE and Imerge, was presented with its Queen's Award for Enterprise in the category of International Trade. The presentation was made by Mr. Hugh Duberly, Lord-Lieutenant of Cambridgeshire, and took place at the company's headquarters in Stretham. Also present were Jim Paice, MP for South East Cambridgeshire and Mark Lloyd, Chief Executive of Cambridgeshire County Council. 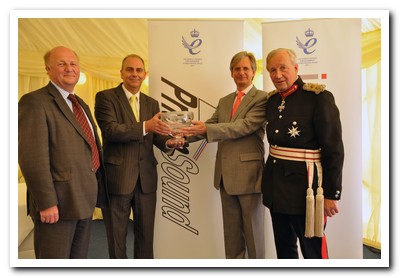 
Graham Boswell, Sales Director of Prism Media Products Limited, expressed his thanks to everyone in the company, saying: "This Award would not have been possible without the hard work and effort put in by our staff and I would like to take this opportunity to thank them. I'm really proud of them all."

Mr. Hugh Duberly pointed out that a Queen's Award is equivalent to an individual receiving an MBE in the Queen's Birthday Honours.

"As Her Majesty's representative, I would like to congratulate Prism Media Products on receiving this Award," he said. "This company is at the sharp end in terms of electronic engineering and what you do is enormously important to the ongoing success of UK PLC."

After offering his congratulations, Jim Paice took the opportunity to announce a major order from the BBC for the company's new SADiE 6 software. The BBC has ordered its first 50 licenses for its BBC North facility in Salford and has selected SADiE as the standard "Craft Editor" for audio to complement its radio production and playout automation systems.

"While exports are key to helping the country get out of the economic mess it has been in, it is also very satisfying to be able to announce such a major contract for the domestic market," Jim Paice said.

The Queen's Award for Enterprise is the highest official UK award for British business. The awards are made on the advice of the Prime Minister and his Advisory Committee, which comprises leading individuals from industry, commerce, trade unions and Government. They are then conferred by HRH Queen Elizabeth II on her birthday, April 21st.

In order to be considered for a Queen's Award for Enterprise in the category of International Trade, a company must show a substantial and sustained increase in export earnings over three consecutive 12-month periods, to a level which is outstanding for the products and services concerned, and for the size of the organisation. Prism Media Products Ltd has experienced six years of sustained sales growth and has more than doubled overseas sales, with 66% of its sales now going to customers abroad.

The company's outstanding performance is supported by 120 foreign dealers and its sister company in the USA, which is headquartered in New Jersey and recently opened an office in California. Prism Media Products Limited created 10 new UK jobs during the Award period and has since employed a further nine staff in the UK.