Cambridge, UK: Malcolm Billings and Brigid O'Hara took home an unexpected bonus from the recent Radio Production Awards after winning a SADiE 6 software package in a prize draw organised by SADiE, which was the main sponsor for the event. 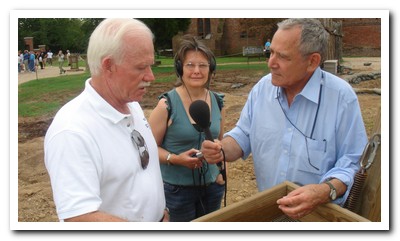 
The husband and wife team run independent radio production company Malcolm Billings & Associates, which is based in London and specialises in creating documentaries for the World Service, BBC Radio 4 and the National Trust.

"We were absolutely thrilled to win the SADiE 6 prize," Malcolm Billings says. "Usually we use Adobe for editing but we are looking forward to getting to grips with SADiE 6, especially as it is the editing format of choice for the BBC, for whom we do a lot of our work."

Radio listeners will be very familiar with the sound of Malcolm Billings' voice as he is one of the BBC's most experienced archaeological broadcasters and is a former presenter of BBC Radio 4's Today programme. More recently he has presented Radio 4's Crossing Continents and also the Heritage history and archaeology series for the World Service. Brigid O'Hara produces all of the company's output. The two are currently working on a book project about the history of the Nazareth hospital in Israel, which this year celebrates its 150th anniversary. Other current projects include audio versions of the Nation Trust's magazine, which are released three times a year.

SADiE specialist Steve Penn says: "I'm delighted that our SADiE 6 software prize was won by such a deserving company and I hope that Malcolm and Brigid will enjoy using its stunning editing capabilities. The Awards ceremony was great fun and we were thrilled to be counted among the sponsors."

The Radio Production Awards, which took place earlier this summer, were launched by The Radio Academy and The Radio Independents Group to recognise and celebrate the work of UK-based radio and audio producers. Unlike the Sony Radio Academy Awards, which recognise programmes, stations and broadcasters, the RPAs honour the achievement of individual producers and production companies on the basis of the body of work they have created and delivered during the previous year.