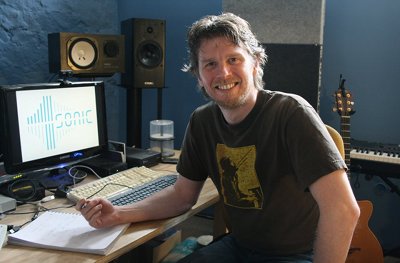 
Gilkes, who founded 1 Sonic eight years ago, says the support offered by Prism Sound was a key factor in his decision to invest in the company's products.

"I was previously using Peak as a playlist editor and doing most other things on Pro Tools," he explains. "But as it was time for an upgrade I decided to go with a company that I knew I could have a good working relationship with, and one that was also based in the UK."

The facility itself is mainly used for mastering and mixing, but it also boasts a live room with 8 tie-lines that is large enough to record drums.

"The outboard in the studio is primarily for tracking, so there are some nice pres and compressors," Gilkes says. "I also have a master section by Audient, PMC and Yamaha monitors, Pro-Tools, various classic guitar and bass amps and a range of microphones - not to mention an over-used tea pot!"

Moving from one software platform to another can be intimidating, but Gilkes says he has found the transition to SADiE 6 far less painful than he anticipated.

"It's always hard work making the transition from one system that you are particularly well versed with to a whole new environment, but SADiE 6 is very intuitive and easy to use," he says. "I'm really enjoying the facilities it provides. The editing facilities, in particular, are great and I like the PQ and DDP tools. However, the sound quality is the most outstanding feature and I am really impressed by that."

"It was a no brainer, really," he says. "The studio needed to make a significant step up in convertor quality and Orpheus delivered the transparency and clarity I was looking for, both as an A/D and a D/A converter. It has great sounding pres and I like the interface features for multi-tracking in Pro Tools."

Gilkes is now using SADiE 6 and Orpheus on a variety of projects, including mastering an album for French artist Mayra Andrade on Sony (France), recording tracks for Congo Natty, completing a debut album for Chevron, recording drums for the next Grasscut (Ninja Tune) album, finishing backline tracking for a band called Bentcousin, which is releasing a three-track single through Team-Love NY and completing an album for a local Brighton band called the Meow Meows.

And if that work schedule isn't intensive enough, Gilkes is also producing and co-writing with the legendary Russell Stone of R&J Stone fame.

"The Russell Stone project is very interesting as all tracks are vocal/non-verbal and based on free improvisations." He says. "The album, which is called HUMU, is very nearly finished and should be out in September."