California, USA: 7 November 2013: Universal Mastering Studios in Los Angeles has replaced its entire stock of mastering and production systems with SADiE Series 6 workstations. The facility, which is renowned for its audio quality, will also be utilizing Prism Sound's digital converters. 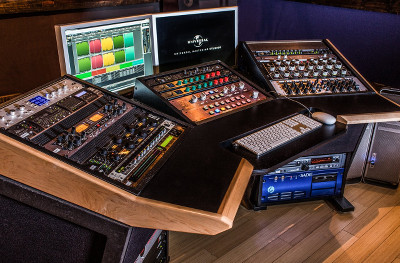 
In total, three mastering rooms and four production rooms have been equipped with the new SADiE 6 systems, each running native but in a SADiE blue box. Universal Mastering Studios has also installed four Prism Sound Lyra 2 audio interfaces in its production rooms and added a Prism Sound multichannel modular ADA-8XR AD/DA converter to the equipment racks in each of its three mastering studios.

Graham Boswell, sales and marketing director of Prism Sound/SADiE, says: "This is a major contract for our company and one of our biggest mastering studio projects to have come to fruition in recent years. We are absolutely delighted to have this opportunity to work with the renowned team at Universal Mastering Studios; their rooms are some of the finest mastering rooms in North America. It is also hugely rewarding to see our ADA-8XR converters and new Lyra audio interfaces being readily accepted into a facility that is so significant on the world stage."

"Universal Mastering Studios has always been focused on having state-of-the-art facilities and this helps keep us on the cutting edge of audio technology for all of our clients," says Nick Dofflemyer, Senior Director of Studio Operations at Universal Mastering Studios. "Another reason for our choice was simply that SADiE systems sound great. We liked the fact that SADiE offered multiple ways of performing editing tasks, as well as offering a lot of extra features that you don't get with other DAWs. Their reliability and compatibility with different audio formats was equally important to us and we're happy to have upgraded the converters in all our room so that they can deal with 192KHz audio." Universal Mastering Studios has been delivering top class mastering services for over 22 years. Its primary responsibility it to provide post production audio services to wholly owned Universal Music Group labels such as Interscope, Republic, Geffen, Island, Decca, Def Jam and the Capitol Music Group. It also offers mastering and production services to independent third party clients of all kinds.

"We have the ability to rapidly process mastering requests with a greater efficiency than virtually any other studio," says Dofflemyer. "Combining the latest technology with our team of highly experienced engineers enables us to give the best quality of service to our wide-range of clients, which run the gamut from major record labels to independent songwriters."

Alongside its use of Prism Sound and SADiE technology, Universal Mastering Studios has also added the mastering version of Manley Massive Passive EQ to its Studio B and added a Crane Song Avocett monitor controller to Studio C. All the production and mastering rooms incorporate Zero Reflection (ZR) technology and were designed by Delta H Design.

"It's been an exciting time for Universal Mastering Studios," says Dofflemyer. "The combination of competitive pricing, first-rate engineers, and the latest in studio technology makes us one of the best studios available."