London, UK: With the second series of BBC's popular show The Restaurant due to screen in the autumn, celebrity chef Raymond Blanc is currently putting nine more couples through their paces to see if they have what it takes to run their own restaurant.

And behind the scenes The Cruet Company is once again putting its SADiE LRX2 Location Audio Workstation through its paces by using it to record multitrack audio for the show, which is being filmed at Greenford Studios in West London. 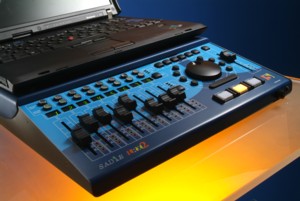 Based in Wandsworth, London, The Cruet Company has more than 20 years experience of shooting and crewing for broadcast and corporate clients. As well as supplying high quality equipment to programme makers, the company also has experienced and highly trained crew who ensure that projects are successfully managed and completed.

Operations director Don Knee says the SADiE LRX2 was originally acquired in 2006 for use on Sir Alan Sugar's The Apprentice. Designed to fulfil the needs of an ever more complex recording environment and to serve a wide variety of remote recording applications, the LRX2 is as effective at capturing the original soundtracks for film and television productions as it is for producing location multitrack audio recordings for release on distributed media such as CD or DVD.

"When we took on The Apprentice in 2006, multitrack recording had previously been performed using DVD-RAM recorders, which meant lots of recording media was required," Knee explains. "With SADiE we could record straight to a standard laptop, so at the end of a day's shooting all we had to do was hand over a portable hard drive."

Based on the original SADiE LRX, which was introduced in 2005, the LRX2 takes the concept a stage further by providing additional DSP power, plus control surface enhancements, to offer the user the ability to record up to 48 discrete inputs at 48kHz/24bit (or up to 32 tracks at 96kHz/24bit) from a variety of dedicated input cards.

The LRX2 hardware comprises a small assignable built-in mixer with automation and 8 motorised faders, which allow rapid switching between the input and output busses with simple bank switching, pre-fade listen over headphone output, direct record track select, plus locator buttons and a separate monitor buss. It also has professional interfaces that lock the machine to timecode, video ref or gen-locked incoming AES ref, depending on the application. Dedicated and assignable function buttons make editing very easy, while the dedicated SADiE MTR on-screen graphical user interface greatly simplifies user operation and enables the operator to quickly get to grips with the system. Sessions created in MTR mode are fully compatible with, and may be opened in, SADiE V5 software for more sophisticated post production operations. Full Metadata support is provided in MTR mode to allow the operator to easily keep track of recordings and takes.

The ease and versatility of the SADiE system is once again coming into its own with the new series of The Restaurant.

"Our sound engineer had never used an LRX2 before but within a very short time he was up and running with it and finding it incredibly easy to use," Knee says. "For this particular production we only record multitrack because that is the requirement from the production company. Each contestant and presenter is individually mic'ed, and whilst a rough mix is sent as a guide to cameras, the final mix is done in post."

The LRX2 uses a standard PC Laptop running Windows XP™ with a USB2 interface. A second external drive can be attached, via USB2 or Firewire, to mirror recordings and provide a simultaneous safety copy. The Cruet Company has utilised this function for the Restaurant as a safeguard and backup.

"Mirror record is vital," Knee explains. "Hard drives are proving very reliable, but it gives us a safety net, just in case. Also, we keep a backup of all the daily recordings which mirror record provides us with automatically."

Since acquiring its LRX2, The Cruet Company has upgraded its system by installing a number of digital I/O cards, which are helping to simplify cabling, increase quality and provide greater flexibility. The cards also make the system compatible with another new addition to the company's equipment stock - a Yamaha LS9-32.

"We are absolutely delighted with the way our SADiE LRX2 has performed," Knee adds. "It is so reliable and easy to use that it was a natural choice for this show, especially as it performed so well during the shooting of The Apprentice."