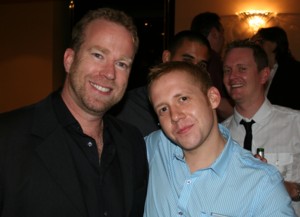 SADiE's Pete Nash (left) with the winner of the PCM2, Daniel Connew


"I don't usually enter prize draws but on this occasion I'm really glad I did," Daniel says. "I have already fired up the system and from what I've seen it looks fantastic. I am really impressed with the software and the number of useful features it includes. SADiE has a great reputation in the audio post industry and everyone I speak to keeps telling me how lucky I am to win this."

The SADiE PCM2 provides the ability to edit audio professionally wherever you can take a laptop running Windows XP. The hardware incorporates a jog-wheel and dedicated edit buttons for ease and speed of editing, while the Version 5 software offers a full range of non-destructive programme production, mastering, and post-production features and options.