LRX2 goes on location in Wales

Cambridge, UK: It's a well recognised truism that living close to a tourist attraction or place of historic interest makes you less likely to visit it, simply because it's there, it's close and you can always do it another day. 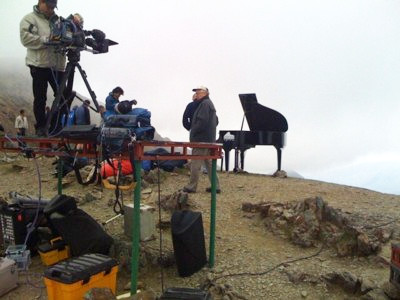 On location in Wales


For classical singer Bryn Terfel, this premise proved to be the starting point for a fascinating television series - Bryn Close To Home - which is due to be broadcast in the Spring of 2009. The series, commissioned by BBC Wales' Music department, shows Bryn visiting places close to his own home in North Wales that he has either never visited or has not been to for a long time. In each location he gives a musical performance showcasing his amazing vocal talent.

To capture the all-important audio for the programme, BBC Wales called in the expertise of former BBC Sound Supervisor Martin Gifford, who set up his own company, 24Bit Ltd, in 2007 to provide specialist location and music recording facilities to the broadcast industry.

24Bit Ltd has a mobile recording, editing and dubbing facility, which is built on a compact Mercedes Vito chassis and is small enough to allow access to even the most difficult location. Ideal for multicamera flyaways, the entire rig can, where necessary, be demounted and installed in a venue in around an hour.

For recording and editing, Martin uses a SADiE LRX2 multitrack location recording interface, which can either be used as a 32 channel analogue stand-alone unit or linked to the truck's 64-channel Yamaha digital desk via a MADI/CAT-5 based multicore system. 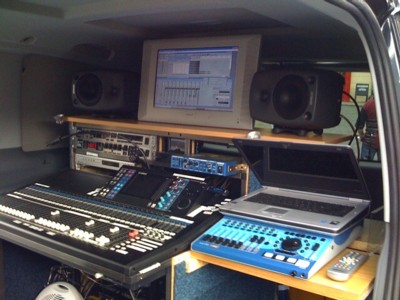 The LRX2 at home in the 24Bit truck


The SADiE LRX2 is best known for its leading 'craft editing' software that provides sophisticated editing capability with an easy-to-use interface. Designed to fulfil the needs of an ever more complex recording environment and to serve a wide variety of remote recording applications, the LRX2 is becoming increasingly popular with production companies and film crews that need to record multitrack audio. Its features include dedicated transport controls, high channel density (up to 48 microphone or line input channels or 64 channels using MADI), the ability to record to duplicate hard disks and general robustness. SADiE products also incorporate proprietary recording algorithms designed to get the audio into a disk file fast, avoiding too much buffering in RAM. This means that, should recording be interrupted unexpectedly, very little is lost - only a few seconds would be at risk, compared to less robust software implementations where potentially large amounts of audio can be lost if recording is interrupted.

"SADiE has been my choice of editor - and subsequently location recorder - since it was first introduced to the BBC," Martin says. "Its main attractions are reliability, ease of use and the excellent back-up I get from the Prism Sound and SADiE team, which is always available by phone whenever I need it. The LRX2 provides me with the ability to tackle projects that, in previous times, would have required large vehicles and several staff. Thanks to the LRX2's ability to work with multitrack timecode files, I can record an opera, provide a working mix on the day, remix at my leisure, deliver a proposed synced final mix via the internet, and remix to changes - all without leaving home. Much of my work just goes straight back into the video editor and is transmitted without any dub. Using Sadie I have even dubbed on location for transmissions with a very short turnaround."

For the Bryn Terfel project, Martin's LRX2 really came into its own because some of the locations chosen for the programme were very inaccessible. The programme includes a visit to Bardsey Island, complete with a grand piano, which involved some difficult logistics. There was also a trip up Snowdon, again with a grand piano; an open air shoot in Portmeirion (best known as the location for the 1960s cult TV show The Prisoner); a performance with 100 children on Caernarfon quay front, and the trip down Llechwedd slate caverns.

Martin says: "My SADiE LRX was used in nearly every location, but in terms of technically challenging the recording at the slate caverns definitely tops the bill. For this item the Welsh electric folk group Ar Log performed with Bryn, using the above ground village as a set. The group had pre recorded multitrack backing tracks, which were not yet finished or mixed. The tracks arrived less than an hour before shooting was due to start, and I brought them into my SADiE LRX2 for replay and for Bryn to overdub the lead vocal, standing with headphones at the rear of my mobile sound truck. Of course several takes were necessary, and after instant multitrack editing on site (which is a SADiE speciality) and replaying a timecoded sync mix, the whole project was returned to the band for further work and final mix, always keeping the live vocals in sync with the TV shoot."

The Snowdon shoot also had its moments, thanks to the difficulty of the terrain. Martin was limited with how much kit he could take up and down the mountain so he used his iPhone for the final replay.

"Without SADiE to pre-record and the ability to return to the master recording, I would not have had the confidence to do what I did," he says. "That's the really great thing about the SADiE LRX2 - it gives me the confidence to say yes to any recording request. When I first started out I had an original LRX with 16 mic inputs. Then I upgraded to the LRX2 with 32 mics and most recently I added a MADI card. If that's not evolution as I needed it (and could afford it) then I don't know what is!"

Apart from the Bryn Terfal programme, Martin has also used his SADiE system to record a number of opera projects, including Terfel's Falstaff, and for Christmas a variety concert from the Wales Millennium Centre, featuring Ysgol Glanaethwy, the choir that were runners up in the BBC Last Choir Standing competition. He also multitracked congregation items for the Advent Songs of Praise, and used the system for preparation and playback on location for ITV's Aled Jones Christmas Carols, which was broadcast on Christmas Eve.

"Alongside my professional engagements, I also get involved with semi professional choral recordings," Martin adds. "The ability to bring highly sophisticated location multitrack recording and editing into their world has literally changed the ambitions, abilities and quality of product they produce."