Get up to date with the latest SADiE 5 software

Cambridge, UK: The near-fanatical loyalty of SADiE users is testament to the success of the company, whose products provide all the tools needed for serious radio programme production, high track count location recording, mastering and post production studios as well as large-scale multitrack applications. 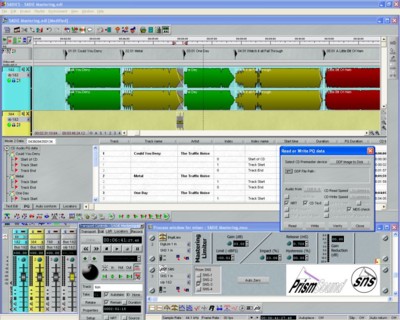 Indeed many of these customers are so loyal that they are happily working with much earlier versions of SADiE hardware because they are still achieving perfectly acceptable results.

However, times have moved on - as has SADiE hardware. The latest Version 5 is much more powerful than any of its predecessors, bringing significant advantages in terms of ease of use, new features and flexibility.

Prism Sound, SADiE's parent company, is keen to encourage existing users to upgrade so that they benefit from the wealth of features that are only available with the latest version. To this end the company is offering a 25% discount off the list price of SADiE5 to any SADiE3 or SADiE4 user who wants to make the switch.

So what are the advantages? For those who still need convincing, here is a quick breakdown: SADiE5 also offers various Interchange options and supports AAF, OMF, AES31, BWF and iXML. Other features include File based Autoconform and Re-conform; CD writing to any internal CD writer; a CD Text option; a CD-SRC option for burning CD-R and DDP directly from high sample rate audio material; a CD-Ripper interface to simplify importing from audio CDs; AVI and Quicktime video playback; a 9-pin slave option and control by HUI and consoles.

Users wishing to upgrade should also be aware that switching to SADiE5 does not require any re-training because the new version retains all of the essential interface functions of earlier SADiE versions - it just does everything so much better!