Cambridge, UK: Danish producer and lutenist Viggo Mangor is receiving rave reviews in the classical music press for his recording of Carl Nielsen's chamber music - the second volume in a mini series released on the Dacapo label. 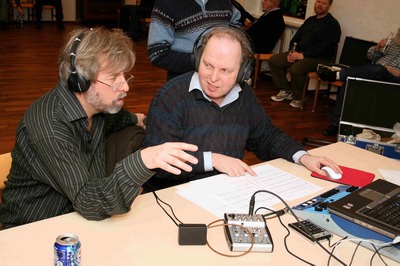 Many of the reviews for Chamber Music Vol. 2 cite the exceptional quality of the recording, which was carried out on a SADiE LRX2 Location Audio Workstation. "The LRX2 is the perfect choice for recordings like this," Viggo Mangor says. "All you need to bring on location are microphones, stands and cables, plus your LRX2 and laptop - and a pair of high quality headphones."

The album was recorded in the Black Diamond Concert Hall in Copenhagen using a combination of Schoeps and Neumann microphones. The chamber ensemble, consisting of pianist Jens Elvekjær and violinists Tue Lautrup and Jon Gjesme, played Nielsen's works for violin and piano, along with two compositions for solo violin. These works have never achieved the same popularity as Nielsen's famous Wind Quintet, but they offer a beautiful, precise and very wide-ranging picture of Denmark's national composer. Classics Today reviewer David Hurwitz, who gave the album 10/10 for artistic and sound quality, says: "The engineering is just about perfect - beautifully balanced in the sonatas; warmly natural and not too close in the solo violin works. A great disc!"

Mangor believes that much of the credit for the sound quality lies with the SADiE LRX2 and SADiE 5 software. This powerful and flexible multi-channel workstation is ideal for the demands of recording and editing on location and it is capable of handling up to 64 channels through a MADI interface, or 48 channels using a choice of digital and/or analogue Input/Output cards.

"The very high quality of every part of the LRX2, together with the added benefit of SADiE 5 editing software packed into the same recording device, makes the LRX2 unique on the market today," Mangor says. "What I find particularly useful is the combination of very high sound quality and fully featured editing facilities. This means that editing can be started on the location, thus making sure that certain difficult edits can be done more or less on the fly and then saved as groups both in the EDL and clipstore."

"The unique combination of recording and editing facilities made it possible for me to discuss interpretation of the score with Jorgen and also to finish 95% of the editing on location during the sandwich and coffee breaks," he says. "With an extremely busy recording schedule, coupled with many concerts with my chamber music groups, it is of vital importance not to fall behind with editing and mastering and thus leave too many loose ends for later. The only serious complaint I have about the LRX2 is that it still cannot make a decent cup of tea. I have tried all AES outputs but it still does not work, Maybe version 5.7?"