Cambridge, UK: With 22 Grammy awards to his credit, including a Lifetime Achievement award, there is no doubt that Stevie Wonder has had a remarkable career. 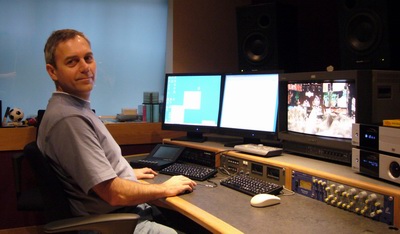 
To mark his achievements across five decades, Universal Motown has recently released Live at Last, Stevie Wonder's first-ever live concert to be released on DVD and Blu-Ray. The concert, which was recorded last autumn at the O2 (Arena) in London, was captured for posterity by Tim Summerhayes onboard the Red-TX mobile. The audio was then mixed by David Woolley at his Thornquest post-production facility in West Sussex.

A long-time SADiE user, Woolley established Thornquest in the mid 1990s to provide audio and video post-production services to an international client base. He has worked on many high profile projects including UK television series and music-to-picture DVD projects for artists such as Elton John and Lionel Richie.

For this particular project, Woolley carried out the mix process using a SADiE PCM-H128 multichannel recorder/editor and a SADiE LRX2 location recording workstation. In common with all his other projects, this mix process didn't require an external console or a DAW controller. Instead he prefers to mix "in the box", moving from one SADiE to another.

"Tim recorded 96 tracks at the concert, but a few were not used because the set list for each show is quite fluid," Woolley explains. "That many tracks in 5.1 maxes out what a H128 can achieve so I decided to use the LRX2 as well. I split the work so that the H128, submixed the 90 stage feeds into 32 outputs, effectively creating a manageable and perfect multi-track. There was a fair bit of subtle patching up because the musicians, who were excellent, were following Stevie's ad-libs on stage and sometimes needed a little help. The Cedar retouch worked wonders fixing occasional feedbacks, clicks and crackles. The H128 was outputting 64-channel MADI to the SADiE LRX2 and I was probably using about 32 which were effectively remixed stems. I'd have half-a dozen for drums, for example, and a few more for guitars, plus a few other inputs for mixed keyboards, a dozen or so for the audience as well as some for the effects sends. The LRX2 was my console, mixing the 32 stems to 5.1 but crucially being able to record them raw for later replay at mastering"

Once Woolley had completed his mix, the project transferred to Metropolis Studios in West London for the mastering stage. Woolley remained involved, working alongside Metropolis mastering engineer Tim Young.

"Rather than sending in some rendered files, I gave Tim the SADiE LRX2 project which was still open. This allowed us to audition and tweak my 5.1 and stereo mixes so the final balance was actually done at Metropolis with the six discrete files being rendered by Tim through his SADiE mastering equipment," Woolley explains. "I wanted to work this way for two reasons - firstly, I wanted to give Tim every opportunity to get into the mix and change whatever he wanted at source. One of the roles of a mastering engineer is to correct deficiencies in the remix, so I thought it would be better to actually mix at the mastering session and the compatibility between SADiE systems gave us the opportunity to do that. Secondly I wanted to review my mix through the excellent Metropolis monitoring and acoustics and still be able to correct any changes from my home studio. This approach worked really well and I'll certainly do it again."

Woolley says that working on SADiE throughout made both the mixing and mastering processes much easier - and much quicker to complete.

"I was listening to the output of the LRX2 when I was mixing at home, but when I took the session to Metropolis and played 32 into six on Tim's SADiE mastering system, I was able to carry on tweaking to achieve the result I wanted. By working this way, Tim and I were able to complete the process in about two days."

Since completing the Stevie Wonder DVD, David Woolley has been using his SADiE equipment on a range of other projects including some Beatles mini features and a Stanley Kubrick installation at the BFI.