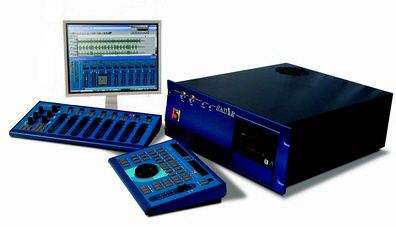 ZDF has been using SADiE systems for 14 years. "The systems are sited at ZDF's main headquarters in Mainz in two different buildings.," explains For-Tune's Stefan Mayer. "ZDF was the first German broadcaster to use the SADiENet network via Fibre Optic ATM and, as a result, audio files can be easily transferred between the two buildings. The audio networking is now a lot easier with the H8 systems and their open architecture.

"ZDF has chosen SADiE again as SADiE gives them the speed (fast bouncing, fast and easy networking) and all the functions they require," he continued. "This includes video record/playback in AVI and QuickTime. It also integrates very well into their video editing environment with OMF and AAF file interchange."

The PCM-H8 is based on the latest generation of DSP processing technology in the SADiE 5.5 software environment. It is designed for complex processing and post production applications where high levels of DSP power are required, but without the need for large numbers of physical input and outputs. It can replay and edit 64 channels of 24bit 48kHz audio with realtime cross-fades and punch-ins, and offers similar DSP processing power to the flagship PCM-H64 multi-track system.