Cambridge, UK: We will be using the Broadcast Video Expo 2010 platform to unveil the new SADiE 6 series to the UK broadcast and post production markets. Come and see us on stand G14 for a demonstration. 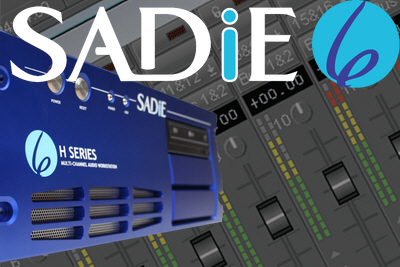 The launch of SADiE 6, which took place at IBC 2009, came just 18 months after Prism Sound acquired the internationally acclaimed SADiE brand. In a bold move that broke with tradition Prism Sound introduced a series of the world famous SADiE products that could run as a software-only version.

SADiE digital audio workstations have been used for the last 18 years in broadcast, mastering, post-production and music recording applications. Until now SADiE users have needed specific proprietary hardware to run their systems but with the new SADiE packages, users can access all the speed, power and flexibility of SADiE on any computer running Microsoft Windows with ASIO compatible audio hardware, as well as existing SADiE5 hardware platforms.

The new products are application based and are focusing on the core SADiE expertise of Radio Production, TV/Film Post, Mastering, Archiving & Restoration, and high-level Sound Design. With no dedicated hardware requirements, the product range will certainly be more cost effective, taking take the SADiE brand, reputation and advantages into new markets. The extended compatibility will also significantly reinforce its appeal to professional users around the world.

Jody Thorne, Sales and Marketing Manager for Prism Sound, says: "The decision to launch a native software solution was driven by key customers, including the BBC, Radio France, YLE (Finland) and other SADiE-based international broadcasters, who are extremely keen to use SADiE as the craft editor into the future, but for support reasons have been pressured by their respective IT infrastructures to use native rather than proprietary hardware. By going native, we are opening up the market for SADiE much further and making it far easier for more audio professionals to benefit from our technology. It also opens doors further into the educational world as a software based version of SADiE gives students and educational establishments a far more cost-effective entry point. This is a major development for the brand and one that we feel the market will fully endorse."

Finally, Prism Sound will be hosting two seminars at BE. The first of these, which takes place in the Audio Room on Wednesday February 17th at 3 pm, will see Prism Sound's Test and Measurement specialist Simon Woollard examining Digital Audio Horrors. Despite its scary title, this seminar will give plenty of helpful and useful advice on how to eliminate pops and glitches from audio recordings.

The second seminar on Thursday 18h February at 10 am is entitled Mastering Mastering and will be hosted by SADiE specialist Pete Nash. He will demonstrate how a combination of SADiE and Prism Sound equipment can easily transform an ordinary audio recording into a masterpiece.