SADiE In "Record Mode" for the ABC at the Falls Festival

Cambridge, UK: SADiE equipment in the shape of the LRX2 location recorder and the PCM-H64 multi-channel recorder/editor has been at the forefront of the Australian Broadcasting Corporation's recent recordings at The Falls Festival. 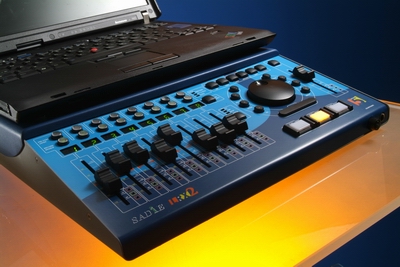 "We ran the SADiE H64 via MADI from the SSL C200 and ran the LRX via the second MADI output as a redundant recorder, which wasn't really necessary as the H64 was completely reliable," Girvan explains. "We tend to use the MTR software for these festival jobs, which means the individual record setups are quick and easy. With 20 minute changeovers between bands, you don't want to spend much time worrying about your recorder, so we use a stream name template that we import into each playlist, recording each band in a new project and ensuring the project name and track names are included in the metadata for easy transfer of the tracks in post. Then you just need to make a few amendments to the stream names and arm the relevant tracks and you can concentrate on ensuring you're getting clean and correct signal from the stage as most acts are a complete re-patch."

The SADiE PCM-H64 system is a multitrack digital recorder which benefits from the full range of SADiE editing and processing features, whilst it is also the most compact and easily-rigged option for taking a multitrack recorder to a venue equipped with a digital desk. THE SADiE LRX2 Location Audio Workstation has been designed to fulfil the needs of an ever more complex recording environment and is as effective in capturing the original soundtracks for film and television productions as it is for producing location multitrack audio recordings.

"The SADiEs were purchased in 2006 as part of a multitrack recorder purchase for the ABC nationally," says Girvan. "We were looking for two types of systems to work as 48 track recorders in the field, either portable or installed in mobile recording vans, and also to be installed in music production studio facilities where ProTools compatibility was required. We assessed several competitive products but the SADiE's project management, mirrored recording ability (which saves time backing up on site and file transfer on return to base), file recovery if the system crashes for whatever reason (SADiE guaranteed that we wouldn't lose more than a minute of audio up to the time we lost the recording - no other system could match this at the time), and price competitiveness were the standout features that convinced us to go with SADiE as our field recorders. Also the recording engineers had some familiarity with the software as the ABC's first SADiE systems were SADiE 2s and 3s back in the early 1990s."

The SADiE kit ticks all the boxes that Girvan says he needs for location recording, mainly to be at least 48 track, small, portable, rock solidly reliable and - crucially - with a good sound. "Obviously at The Falls Festival the SSL was providing the front end sound, but we quite often use the LRX as a standalone unit and think the mic/line slither cards sound amazing considering how much SADiE packs into a small space," he concludes. "When you're recording side of stage, or tucked into a backroom somewhere, space is often at a premium so the small footprint of the LRX keeps everyone happy."