Friendly Fires use SADiE's LRX2 location recorder for US tour 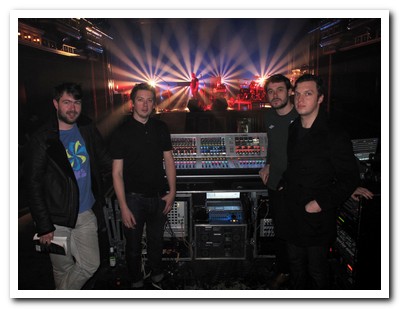 "The LRX2 performed very well," Barling says. "I used it to both multitrack record the shows and 'virtual soundcheck' at soundcheck time. We ran 28 channels from stage, four lines of music and intro at F.O.H and two audience mics. In total, we recorded 36 channels every night via the two fibre optic MADI cables linked to a Soundcraft Vi6 local rack with MADI outs and one wordclock cable. The audio sounded great."

Barling adds that he used the SADiE MTR software to capture and play the audio back into every channel on the Vi6, as if the band were performing on stage.

"The audio comes back into the desk in exactly the same gain level," he explains. "MTR saved the files neatly onto an external hard drive as Broadcast wav files so I could import them into Pro Tools ready for mixing on the tour bus with headphones."

Because Friendly Fires don't like long soundchecks, Barling made good use of virtual soundcheck which allowed him to tune the system to the band rather than a CD or MP3.

"I normally get a couple of tunes out of them in soundcheck, so using virtual soundcheck was a big help," he says. "I would start the playback and just leave the Kick drum channels on and look in the amp room at the sub amps to see how much I could get out of them, etcetera."

SADiE's LRX2 location audio workstation is a powerful multi-channel recorder and editor, capable of recording and editing up to 64 channels through a MADI interface, or 48 channels using a choice of digital and/or analogue Input/Output cards. It runs on a standard USB2 enabled laptop/desktop PC, running Windows XP Home or Professional. The LRX2 comes complete with both the full version of SADiE 5 software and simplified 'MTR' package, providing a simplified, flexible and intuitive user interface for the demands of recording and editing on location.

"I really like the LRX2 because of its size and weight - I didn't have to carry around massive flight cases etc, which was handy as this tour was in the US," says Barling. "It was just a little bigger than my laptop. I also liked the fact that I could use a bog-standard laptop to control the unit as most of the processing is done within the LRX2 and audio saved onto a normal external hard drive. I loved how simple and quick it was to use the interface on the front of the unit. There were a couple of gigs on the tour where we were running very late for load-in. In fact, at one gig in Canada we turned up 45 minutes before doors opened. The combination of the Vi6 and the LRX2 meant that I was able to set up and start making noise within 20 minutes of the gear arriving at a F.O.H position. I didn't really need a soundcheck and the gig turned out to be one of mine and the band's favourites of the tour. This also happened on our last gig in New York City because our bus driver was taken ill, but we did it and I multi-tracked and mixed the show for MTV."

Barling points out that if he was normally to multitrack a gig it would involve hiring a company to come in, bring stage XLR splitters, preamps etc and would involve a lot of money, space and time.

"The LRX2 is the perfect solution to that," he says. "Also from a band point of view, they can hear through the PA system exactly what I'm doing at F.O.H, which gives them extra confidence and creates new ideas, etc. I'm able to try out different FX on things like vocals with the lead singer listening."