Cambridge, UK : As a member of the Audio Engineering Society (AES) Board of Governors and co-chair of the Workshops Committee for the forthcoming AES Convention in San Francisco, its fair to assume that David v.R Bowles knows a thing or two about audio quality. Therefore his decision to invest in a Prism Sound Orpheus Computer FireWire interface is a significant endorsement for the sound quality of a product that he describes as the best external interface available. 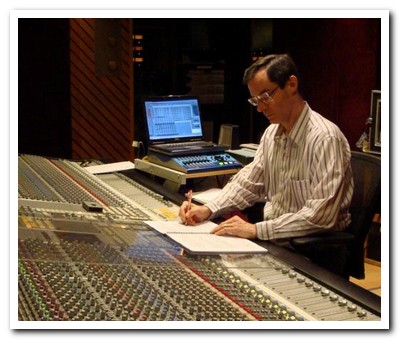 David Bowles in Fantasy Studio A

For his main editing workstation and for all of his location recording projects David v.R Bowles uses SADiE equipment.

I purchased my first SADiE system in 1995, on a recommendation from the renowned classical recording engineer Tony Faulkner, Bowles says. It was the XS/XACT card combination, which I installed in a "lunchbox" computer. This ran off the mains, and had a tilt-up LCD screen of 800x600 pixels, 32MB system memory, a 1GB system drive and a 4GB audio drive. Nevertheless I managed to produce and edit projects for BMG Classics on this system! My monitoring was straightforward: SADiE's AES/EBU outputs to the Prism Sound DA-1, to a pair of Meyer HD-1 monitors.

As SADIE improved its technology, Bowles kept up to speed with the changes by upgrading to an Octavia multitrack system and then to a 24.96 (with 16 channels). At this point he also upgraded his Prism Sound converter to a DA-2 so that he could start working in double-sample rates.

This system lasted quite a while but, as with all things computer-related, it got outdated after a few years in spite of hardware updates, he explains. By this time I was recording projects to a dedicated multi-track recorder, and had to load in audio by playing it in. Later on, with another version of that machine, I was able transfer audio files directly from its hard drive. Needless to say, both of these procedures took time.

The solution to this problem came when SADiE introduced the H64 (MADI-only) workstation. This transition provided more processing power and allowed Bowles to take advantage of the upgraded AES/EBU interface, which permitted single-wire recordings at 88.2 and 96kHz. He also invested in a Cedar Retouch plug-in and this system, combined with PMC AML-1 monitors, is still his main editing workstation.

Location recording, however, is another story. Initially, Bowles had his doubts about the SADiE LRX location recorder and although he was intrigued by the concept, laptops for location audio recording weren't all that powerful. But a year later, when SADiE introduced the LRX2, Bowles felt the time had come to give the new system a try.

He explains: Not only was the LRX2 released with more features, but laptop technology had advanced considerably with dual-core processors and faster hard drives. What really attracted me to this system was the ability to record to an external "mirror" hard drive, thus giving me a safety copy right at the sessions. I bought the LRX2 and a Dell Precision M65 laptop and retired the multitrack recorder. Not only did I have less gear to haul around, but the integrated architecture of the analogue mic/line slither eliminated an output stage and an input stage (needed when using an external A/D converter). However, I could still use outboard mic pres when needed.

Within the past year Bowles has needed a second remote rig for projects requiring no more than 8 channels, and it was this need that prompted him to invest in a Prism Sound Orpheus.

The Orpheus is the best external interface available, therefore I'm able to guarantee clients the same level of quality whether using the H64, LRX2 or Orpheus, he says.

The overriding challenge in recording music is to capture a convincing performance that will engage the listeners emotions and intellect alike, Bowles says. Having the full power of a SADiE workstation on location and thus being able to start work on mixing and editing on the spot is a real advantage. It saves a lot of time in the studio, which is helpful when one is as busy as we are!