Cambridge, UK: Audio post production facility Studio 5/5 has been employing its SADiE digital audio location recorders and workstations to complete the sound design for a number of new theme park rides and attractions. 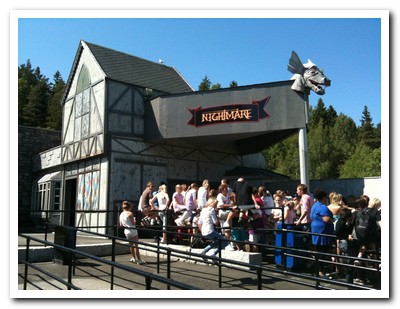 
Headed by Jean-Jacques Quinet, the Brussels-based audio post production facility has been a SADiE user since 1996 and is currently running six SADiE systems including a SADiE PCM-H64, a PCM8, a PCM2 and three SADiE LRX2 Location Recording Workstations - one of which was recently acquired for the facility's new studio in Paris.

"Among the many projects we undertake is the creation, from scratch, of sounds for theme parks," Jean-Jacques Quinet explains. "We get involved in all aspects of the audio, including consulting on the sound system and helping the customer choose the right equipment, positioning the loudspeakers, calibrating the system, creating the soundtracks (both linear and interactive), preparing different language versions and integrating special sound effects such as animatronics and 'butt-kicks'. We also mix and spatialize the sounds on site as the specific sound systems can't be reproduced in the studio."

To create the soundtracks, Studio 5/5 uses an extensive sound FX library with more than 45,000 original sounds. It also has a Foley stage which is used to record new effects.

One of the most recent projects completed by the facility is the sound for the world's first 5D theme park show. Now running in two theme parks on both sides of the Atlantic, the show is called The Castle of Horror in the USA and "Nightmare" in Europe, where it can be experienced at Tusenfryd in Norway. 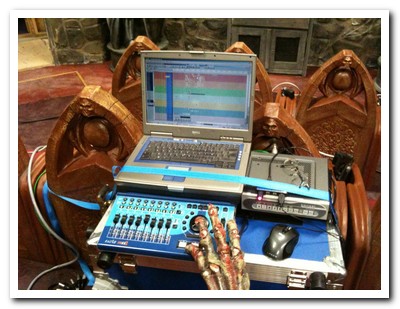 
Quinet explains: "3D is for the movies and 4D is for all the special FX such as animatronics, buttkicks, surround sound, etc. Once you start incorporating player interactivity then you have 5D, which is what this show does. Players can shoot virtual and real targets and pictures of the best player are integrated 'live' into the show."

The Castle of Horror/Nightmare involves seating 25 spectators/players on a rotating platform that can quickly turn throughout 360 degrees. The participants face two or three 3D High Definition screens or wall of animatronics.

"The room is full of special FX such as wind, rain, moving beams, odoriferous spray, neck or leg tickle systems, dropping seats, etc," Quinet says. "For example, when the rotating platform stops in front of a screen displaying a rainy storm, the spectators are sprayed with water and strong wind; when insects invade one of the castle's rooms, the spectators feel the bugs on their necks and legs thanks to the application of compressed air via a small, hidden pipe. At the end of the show, the entire castle collapses and because parts of the set are moving the participants actually feel as though their seats are dropping very quickly, which is brutal but impressive!"

To create the sound for the show, Studio 5/5 decided to surround the room with eight loudspeakers that coincide with the four cardinal points where the rotating platform stops. Two more speakers are positioned on the ceiling and there is also a huge subwoofer hidden in a fireplace. More speakers are positioned on the actual platform - in the USA attraction these are located in the platform's rear wall, while in Norway each seat is equipped with two tiny loudspeakers to create "spot" FX such as close ups of insects or the arming of weapons.

"As the platform is rotating, we were not able to feed these loudspeakers from external amplifiers, so the amplifiers were installed on the platform and wired to a computer synchronized via WIFI with the main show computers in the machine room," Quinet says.

All of the soundtracks were prepared in Brussels, before the mix was finalised on site using SADiE LRX2 multitrack workstations.

"The portability of the LRX2 is vital for these types of projects," Quinet adds. "Equally important is the reliability of the SADiE equipment that we take on location - and its compatibility with what we have back in the studio."

As well as tackling sound design for theme parks, museums and interactive theatre shows, Studio 5/5 also undertakes more traditional audio post work for the film and audiobook community. One recent film post project was La Nostalgia de la Luz, directed by Patricio Guzman, which was screened at the International Film Festival in Cannes and has already won the Award "Cinedecouverte" in Belgium.